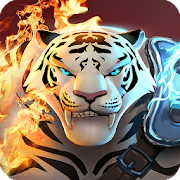 Journey through enchanted lands, collecting fierce and fantastic elemental creatures, and evolve a team of mighty warriors to summon to battle on the path to victory.

ENROLL IN THE ACADEMY OF MAGIC

• Create, customize and level up your own hero

• Choose a House of Magic: Materia, Chimera or Anima

• Discover and collect hundreds of fantastic beasts and iconic creatures

• Watch their evolution from cute companions to legendary war allies

• Equip your team with arcane Glyphs to enhance their abilities

• Level up your creatures to unlock their true might

• Compete in the PvP Arena to rise up the league leaderboards

• Ally with your friends in Guilds for mighty team adventures

LEAD YOUR TEAM TO VICTORY

• Use the elements of Fire, Water, Air and Earth tactically to gain the advantage

• Cast epic spells and use magical abilities of different elements